Walking past Fremantle hospital in the middle of the day, I could have sworn I heard a man yell, cry out in pain. The ambulances are lined up outside emergency. The sound is ghostly, distant: it has not the immediacy nor the closeness of the emergency department.

I walk on into town, wondering. In early February this ED will close, closing with it years of history, of people in and people out, late at night and in the middle of the day. When I was at university, I had a friend who, for our literary journalism project, spent nights in the ED, watching the people who passed through there, listening, writing. I never saw his finished piece but I often think of the image, the student writer in the corner, taking in the pain, the frustration and the boredom.

In reality I can only imagine Fremantle’s ED, a compilation of the external impression of the place from my younger years and all the time I spent in EDs in Melbourne more recently. The two combine to give what is probably an entirely unrealistic picture of the place . But I don’t really want to go inside just to check if the image in my mind is anything like the reality. 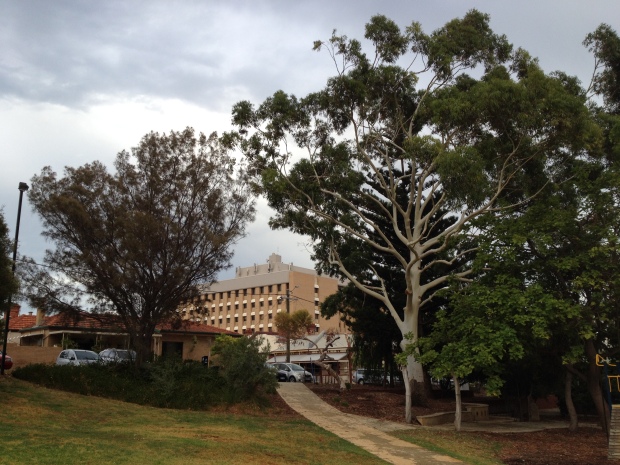 From Fremantle Primary, it’s barely a stone’s throw to the ED.

Tim Winton wrote an article in The Guardian not so long ago about hospitals and living in the shadow of them. He lived opposite the Alma Street mental health unit of Fremantle Hospital. For me place casts a longer, metaphorical shadow as I live several streets away, removed from some of the drama Winton experienced. He describes visitors to the hospital as operating ‘in an unrelievedly histrionic register’, providing for constant entertainment on the surrounding streets.

Winton writes of people around the hospital bearing ‘their own narratives so openly’ – body language ‘heightened’, discretion gone. For me, living further away, the hospital is more occasional in its drama: secrets and people spill out onto the street with all the untidiness of a fracture, or of a split bag spilling grain onto the ground – but it is irregular and random. Sometimes, walking past, Fremantle Hospital is just a big building and all is quiet.

Living a little further away from the hospital itself, it is not the patients – current, past or future – that I see regularly, but rather the health professionals. They are everywhere: parking their cars in the primary school during the holidays, squeezing them onto the sandy front verges of nice people like us who don’t have respectable lawns. They pack their cars tightly onto the vacant block up the hill from the school and are endlessly creative in finding ways to park for eight or ten hours for free. 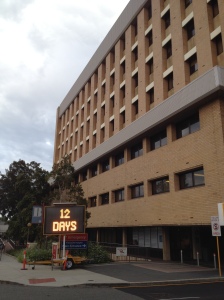 Or they are walking through the park on their way to work at 7am (sometimes they are running, if it’s gone 7 already); they are riding by on all manner of bikes in their blue scrubs and their sensible shoes. They are female and male, young and occasionally old.

In the mornings, they seem organised and focused. The ones on foot almost always have coffee. But I don’t see them in the evenings; our schedules must be out. I often wonder how these same people might look at the end of their day in the big hospital building. How do they feel? And how will they feel when the hospital they work at is out in the suburbs by the freeway instead of right here in the middle of Fremantle?

For Winton, this hospital’s location is defining:

Our hospital was not the modern, discrete, Australian campus set in awesome suburban isolation like a hyper-mall, surrounded by a vast moat of car parking. This was the inner city, a neighbourhood of narrow streets and workers’ cottages, and the hospital had long outgrown its original footprint. The old Victorian building was buried amid hulking brutalist slabs. They didn’t just tower over the surrounding streets; they seemed to project outward.

It is the metaphorical shadow of the place that projects the physical shadow far beyond. This image of Winton’s stuck with me most of all:

I often looked up at that dreary tower as the sun lit up its windows and thought of others staring out in hope and regret as the rest of us went about our day, oblivious. All that yearning spilling down amid the treetops and roof ridges, a shadow I’d never properly considered before.

In less than two weeks that shadow will begin to fade. There will be no ED or facilities for children. Emergency mental health services will go too. Parts of the hospital’s specialist functions will remain, including aged care and non-emergency surgical procedures. The rest of it is headed for the new Fiona Stanley hospital, in the suburbs by the freeway.

Does this mean the yearning will cease to spill down across our roof tops? Perhaps, and perhaps too we will no longer be reminded on a daily basis of the fragility of life. It is hard not to think of it, in the shadow of Fremantle hospital.