It has happened, gradually but surely – fire now so a part of every Australian summer that we head into the hot weather as though into a war zone, prepared for loss, aware that at some level loss is inevitable.

Like war zones, we watch fire on our TV screens and see the photos in the paper. Like in war there are the heartbreaking stories of survival; everyone’s favourite is Sam the koala drinking from a firefighter’s water bottle in 2009.

We watch all this on TV or turn on the radio driving home to listen. But most war zones are far away from our quarter acre blocks in the suburbs or our city apartments.

Not here, not with the fires. Melbourne, so often ensconced in its own little world, was shocked by being blanketed in smoke in 2009. I dropped in and out of the city early that year, passing through a few weeks after the fires; Melbournites were still stunned at this encroachment so close to their big safe city.

And it’s close every year, every bad fire season. Even for those of us living in the city. It’s our relatives, the farmers who grow our food and wool, the tree changers of my parents’ generation, the friends from rural areas that we made at uni or in the workplace – these are the people in the war zones of 45 degree temperatures, 40 knot winds, and fire.

I’ve never been dangerously close to a bushfire. But close enough. A spot fire over the hill, quickly burnt out due to lack of fuel load after a drought. Fires on the ridge beyond a relative’s property, flames burning down a cousin’s driveway. A house lost in the big town up the valley. Cleaning out the gutters, nailing shutters over windows and gratings, testing the fire pump. Watching the weather through the summer, worrying about the animals. Keeping in touch with the relatives to see if everyone’s alright. Trimming the horses’ tails. This is close enough.

I don’t have any of my red photos from the 2003 fires. They were all red or orange or brown; even photos inside the kitchen seem tainted by the red sky outside. So here is one of the mountains instead, years after the fires, but with the scars still present, and one brave little hut in the middle of it all. 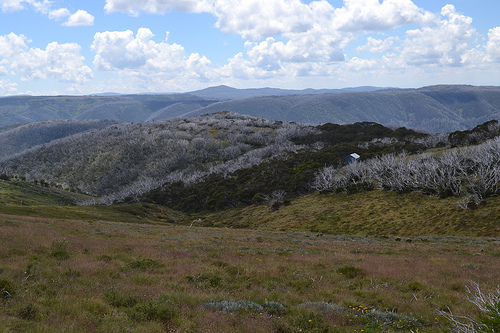 First of March, and the world outside is swirling – the wind, the bursts of rain, the windows rattling in their frames. It’s swirling because I am inside, looking inwards, so that the weather outside seems to revolve. It’s not going anywhere, not travelling past, but is instead centred on this house. It is a curtain over the outside world: shutting it out, shutting me away.

Inside, I’m trying to write an essay. It’s a politics essay on global environmental governance. I started from scratch in a manner that is quite unlike any essay I’ve done before. For this one, the thought processes have been different: it required more research than usual just to get a grasp of what I was dealing with, before I could begin to form an argument. I’ve never studied international politics before this unit, and with the unit itself having finished a little while ago, my grasp on the content seemed to have slipped. But today inside the swirling weather and the cosy house walls it seems to be coming back.

Much has been written about place, and the importance of place and your own space when you’re writing. This space at the desk is not always all mine and is often cluttered. It’s not normally a place where I can focus – I’m usually better off in the little bungalow in the backyard – it’s sparse and there are big windows full of greenery. Today, there is something about the weather and the possible onset of autumn that makes it okay to be studying here. It’s a good feeling!