I’m  in the dining room of a lodge at Thredbo Alpine Village, watching sunlight fall in fast-moving patches down the face of the opposite slope, by turns illuminating the lines of the chairlift as strings of silver or softening the bush into shadow.

Patches of bush are courted by blank grassy stretches, the long areas cleared for ski runs and now, in late autumn before the snow falls, criss-crossed by mountain bikes, walkers and maintenance vehicles.

Coming to Thredbo was a result of going with the flow. A friend and I intended to go away – somewhere quiet – to write. She planned to work on her thesis and I to work on various  writing projects. But her research into alpine invertebrates requires a bit more field work, so we came here, and while I spend time writing she is out at various spots along the Rams Head Range or the Dead Horse Gap Track, setting pitfall traps and photographing grasshoppers. 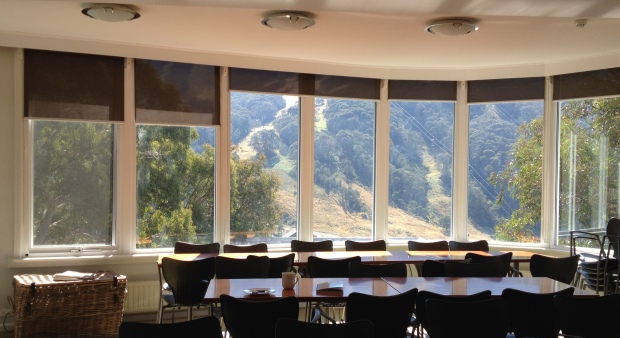 The dining room at the lodge with a view of Thredbo’s ski slopes.

I have come here to write, but could not resist going for a hike, too – across the undulating alpine slopes from the top of Thredbo’s only summer-operating chairlift to the summit of Mount Kosciuszko at 2228m elevation.

Kosciuszko is an easy-to-reach summit by the standard of world peaks: the chairlift takes you to an elevation of 1925m so it is a climb of 300m over an easy walk of less than 7km one-way.

At the summit of Mount Kosciuszko.

Nonetheless, walking to Kosciuszko’s summit felt momentous in the way of measurable achievements: it might be derided as a mere hill by the standards of mountains on other continents, but it remains Australia’s highest and it has an ancient geological history.

At the summit, it was noisy with the caws of the Little Ravens who gather on the rocky peaks to feed on Bogong moths. To the west, the Australian Alps lay in a smoky purple haze, layer upon layer of ridge fading into the distance.

In walking from Thredbo to Kosciuszko, I followed in the steps of thousands who have walked that way before me. The walk is ‘paved’ by a raised metal walkway, designed to keep walkers off the vegetation and to impede the flow of water as little as possible. I only saw one person stray from the beaten track, into the boulders near the Kosciuszko Lookout.

I left early enough to beat the crowds on the way out, but on my return passed dozens of teenagers, some cheerful, others looking mutely resentful at the prospect of the climb ahead of them.

Across the alpine landscape towards the Main Range and Kosciuszko.

On the return trip I stopped by the small creeks that are the headwaters of the Snowy River. I have spent so much of my life in the foothills of Australian mountains in Victoria, but if I ever previously visited the Snowy, it was when I was very small and I have no recollection of it.

It seemed important to stop by the water and notice it: the beginning of a great river, albeit one that is dammed and diverted and changed beyond all recognition from its ancient past.

5 thoughts on “Three days in Thredbo”