Every day I see Mount Majura from the balcony. Yesterday, I stood on Mount Majura and looked at our balcony. Majura is one of Canberra’s mountains – 888m above sea level; about 300m above Canberra itself.

Here’s some impressions from my walk up Mount Majura.

I set out from Hackett Gate, which sounds rather exciting and adventurous. Casuarina Trail cuts up across the wide track that runs under the powerlines then narrows, climbs and zig-zags up the side of the mountain. I’m glad it doesn’t have a dramatic name like Mount Ainslie’s Kokoda Trail; I already feel disingenuous calling this a mountain if I can walk up in 45 minutes or so.

Quiet in the woodlands

It was windy when I left home, but all is quiet in the lee of the mountain. The south ridge is open box-gum woodland, apparently cleared at some stage (unlike neighbouring Mount Ainslie). Living in a built-up area in Canberra’s north, it feels like I haven’t experienced this much quiet in weeks. Even the birds are silent; including the two crimson rosellas close to the trail on my way up, feeding on grass seeds, bright against the dim green of the bush. 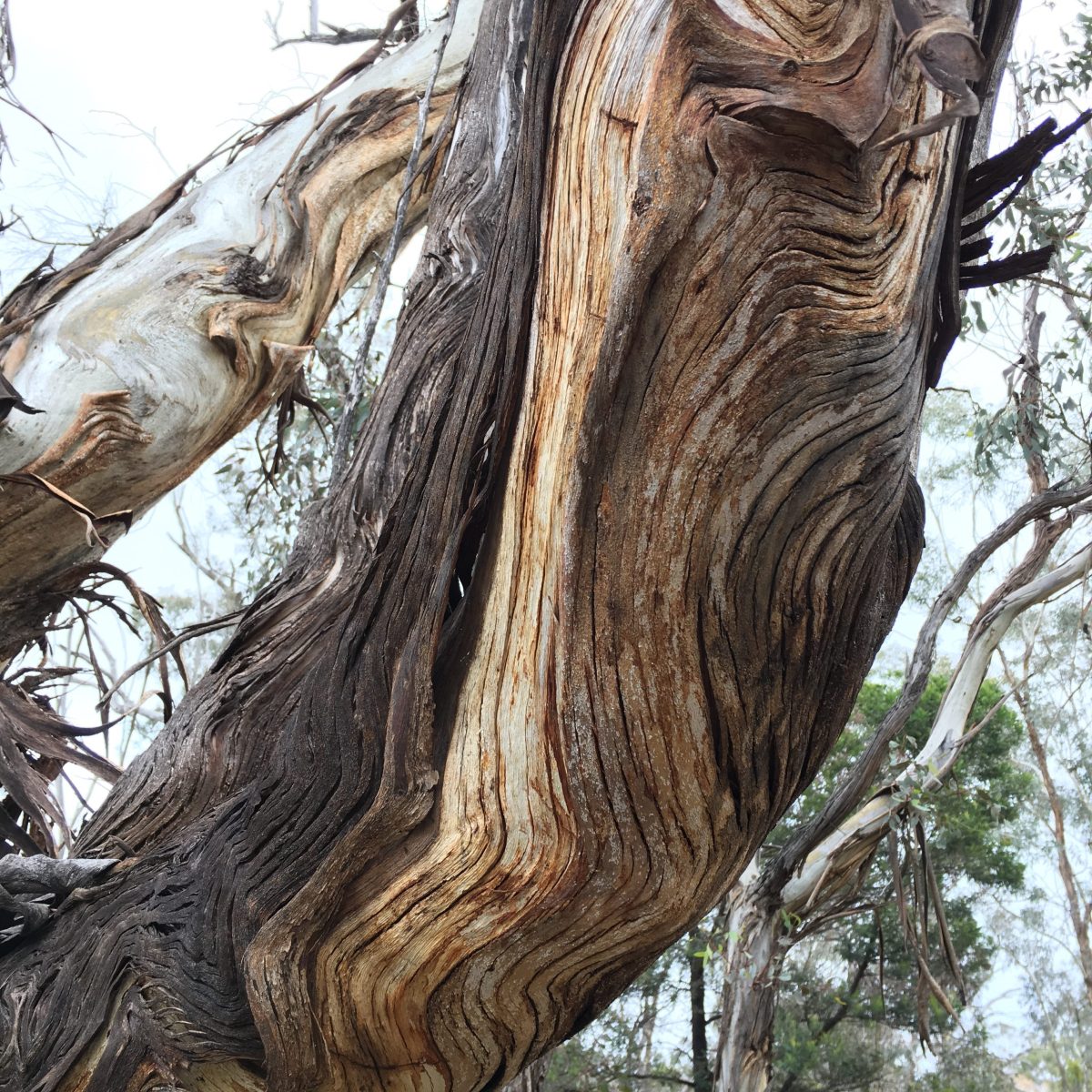 Being out and about, walking in one of Canberra’s busy parks or nature reserves during coronavirus restrictions has felt by turns both strange and surprisingly normal. Normal because green spaces seem unchanged; normal because there are still casual hellos exchanged with people going the other way. (Thankfully most people have got over the awkwardness of the early stages of social distancing, when saying hello seemed like it might break the rules and most people averted their eyes.) But strange too because everyone still carries the awareness of the 1.5m buffer and yields a little more easily on narrow trails than might usually be the case.

Near the summit, in a flatter area choked with long green grass, I caught up to a couple who were looking intently at the trees. I followed their gaze: we were out of box-gum woodland and into something quite different – a grove of kurrajongs (Brachychiton populneus), apparently the remnant of a “historical” 1920s planting of 8000 seedlings as a fodder-tree reserve. The ground was strewn with their big black seed pods. (Read more about kurrajongs in Canberra on the website of the National Aboretum.) 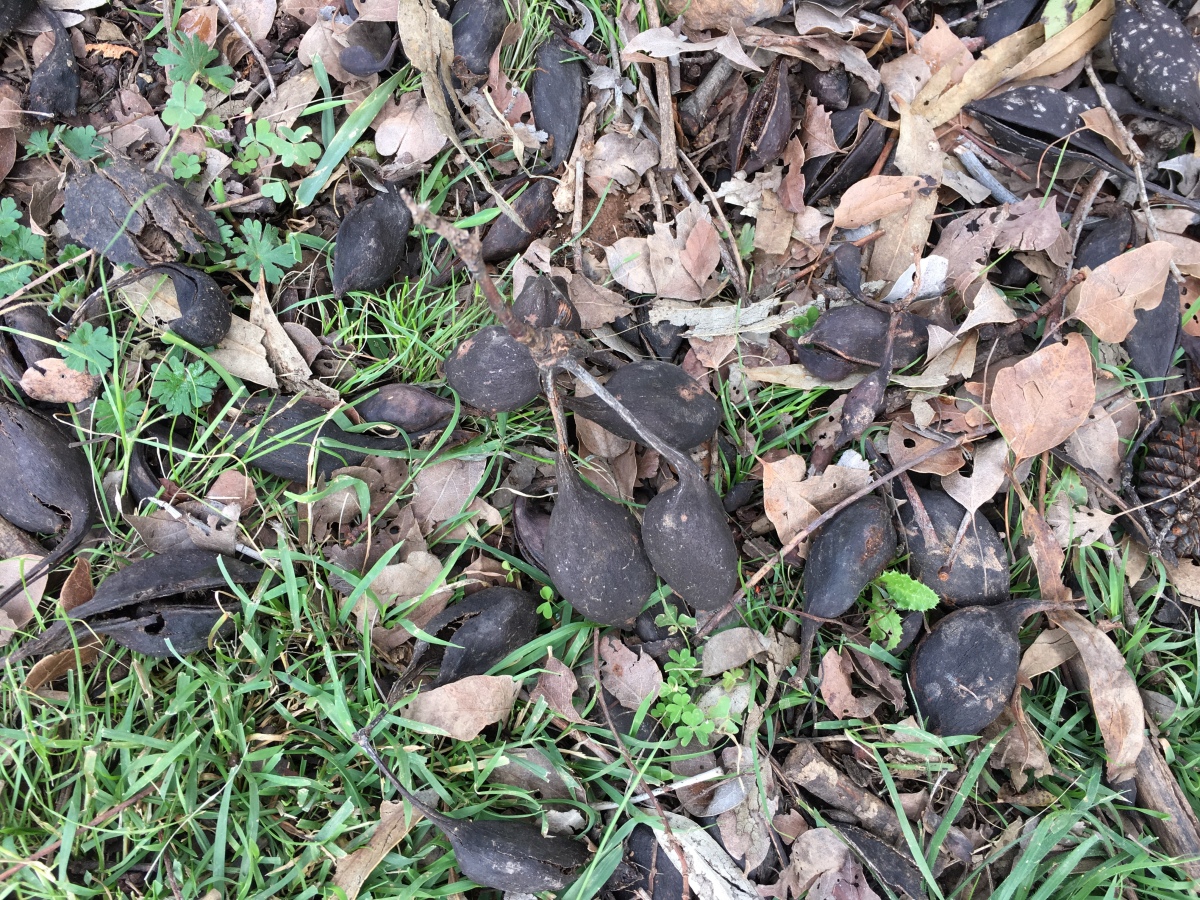 This is Ngunnawal country. I am still getting used to the light here. There is a brilliance to it, but even in mid-summer it did not have the intensity I’m used to in Fremantle. Now the nights are growing cold. The cloud and sun change places through the morning, with sun showers coming ahead of the rain clouds. Later, when I’m back in the car, it really rains; Sullivan’s Creek will be flowing again. 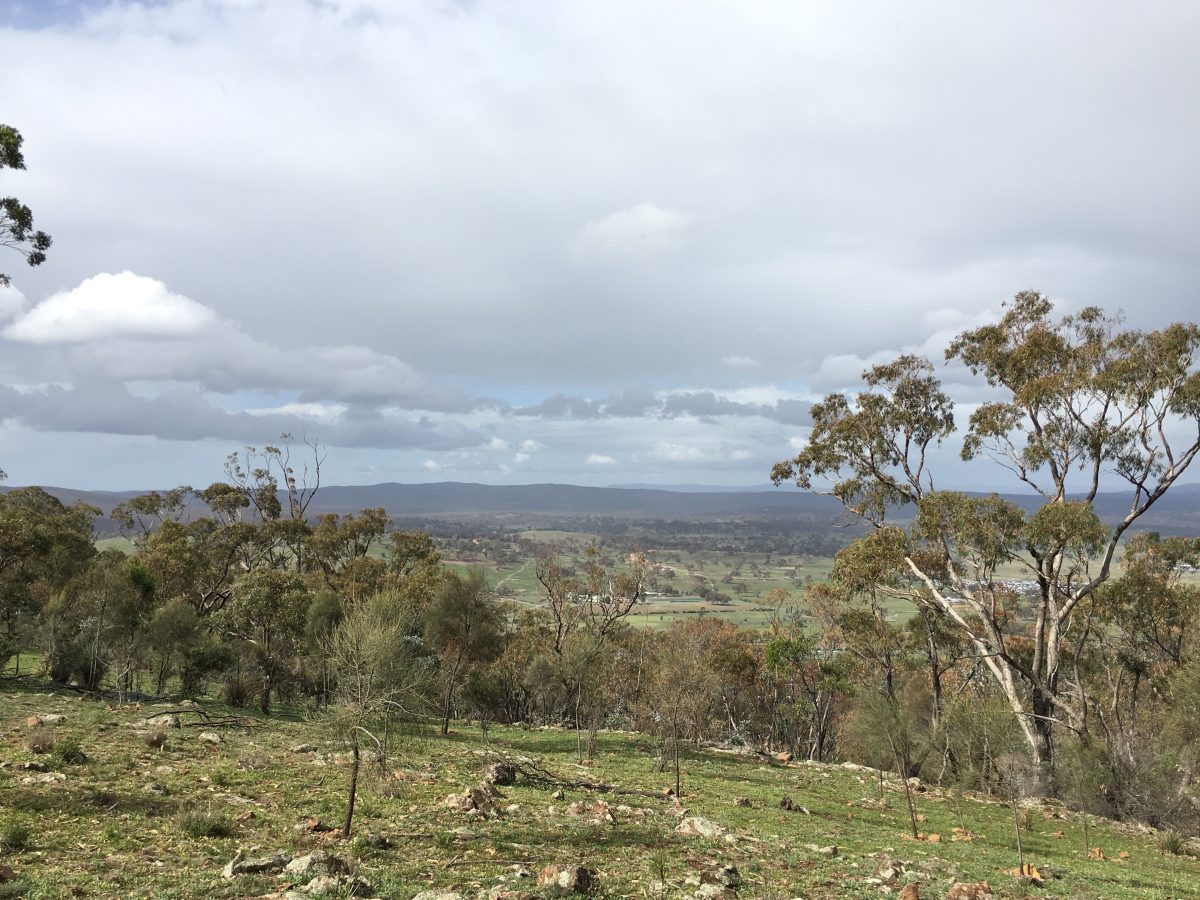 From the summit of Mount Majura I can see my balcony through the binoculars, but am distracted by the billowing smoke almost directly behind: a house fire on Scrivener Street, O’Connor. The storm clouds are rolling in and it’s windy and cold: the promised sunny morning with 18 degrees is quickly fading into Canberra winter. In the far distance I can just see snow on the mountains. 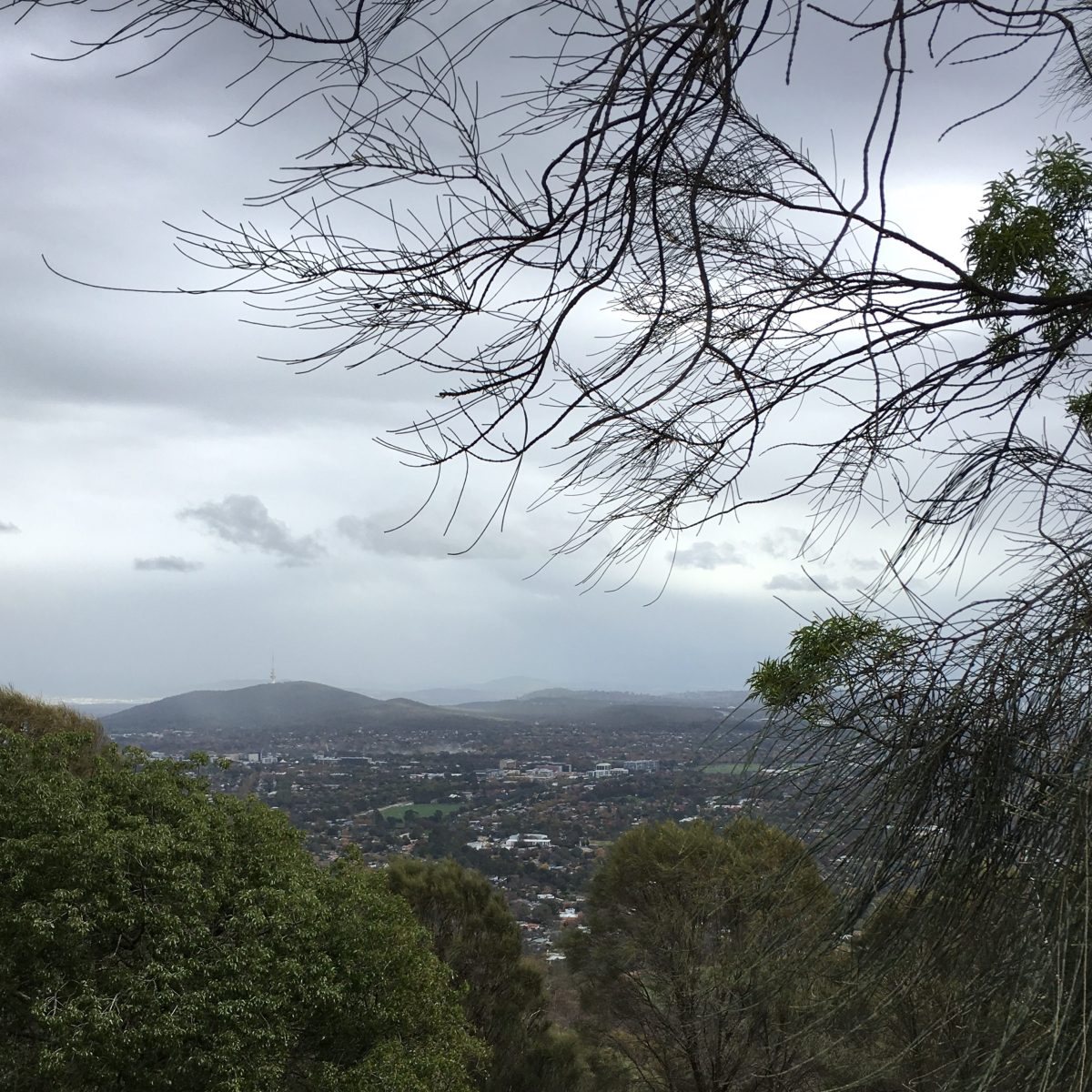 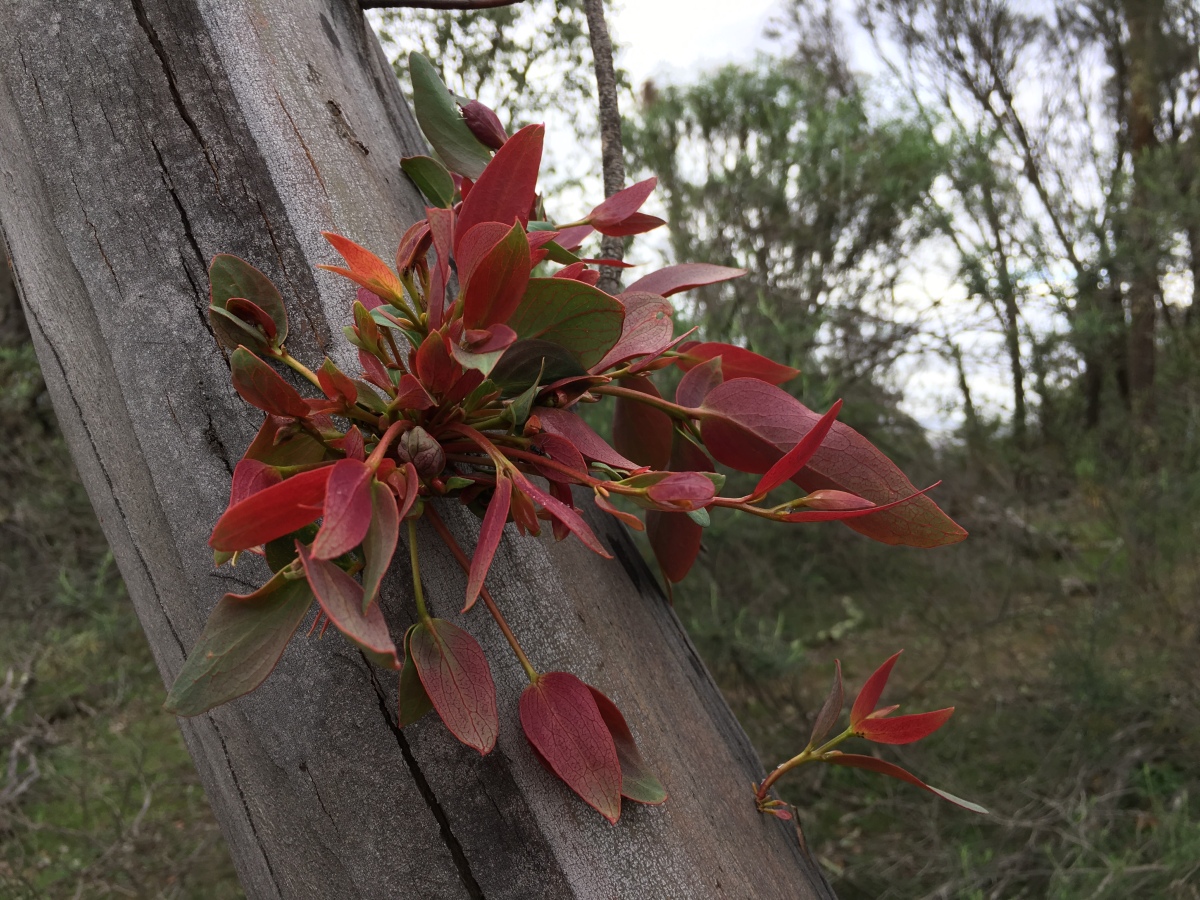 I spotted this tiny mushroom – perhaps the size of a five cent coin – among the leaf litter at the base of the smooth barked eucalypt with the new growth, above. Fresh from undertaking an online “Mushroom Discovery” workshop with Alison Pouliot last weekend, I had a close look at this little specimen, but my fungi-ID skills aren’t up to scratch and I still have no idea what it is! 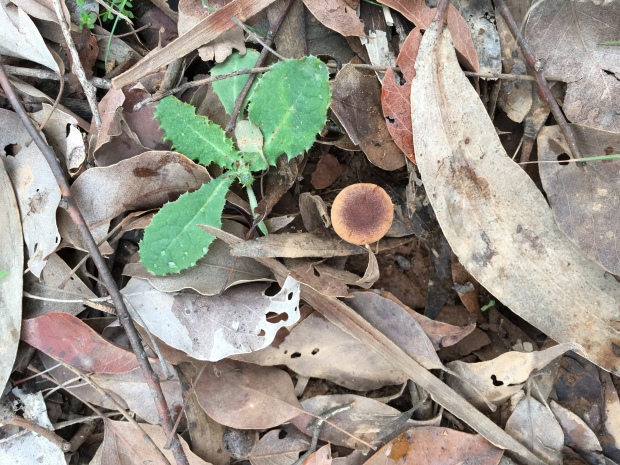 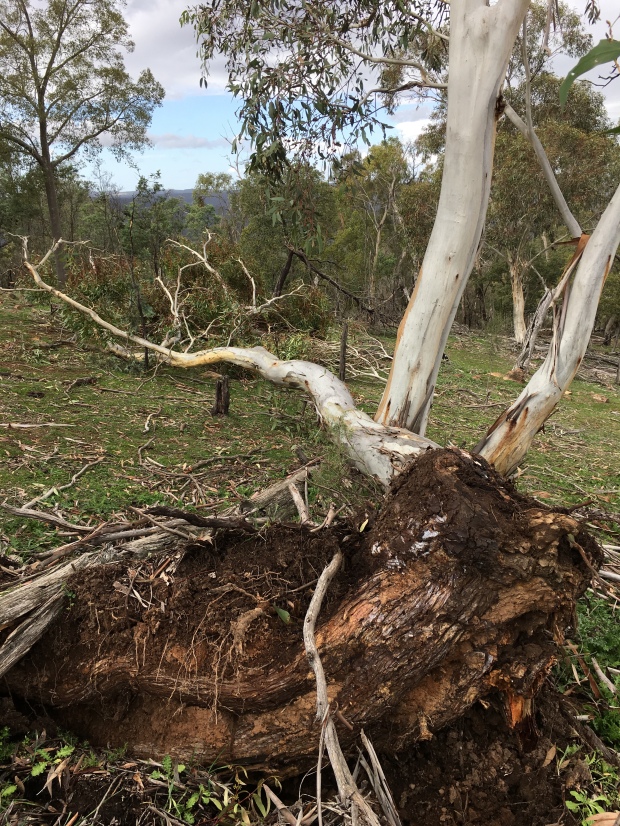 It is a day for crimson rosellas. A pair, floating in the thin upper branches of a sapling that rises and falls under their weight.

Later, a tiny rustle in the undergrowth; I spot the crimson and blue again. A lone rosella this time, wandering along, exploring. Then my eye catches similar movement – there are two, after all, the second one a camouflaged green-backed juvenile.

They squeak to one another. The adult bends down a grass stem with one foot to nibble at its seeds. After a moment they move on, the juvenile on the ground while the adult hops through a dry bush, jumping twig to twig.

Suddenly, together, they take off for no apparent reason, calling loudly, a flash of colour through the trees.

Over the coming weeks, weather depending, I hope to explore more of the mountains around which Canberra is built. The six uphill walks in this ABC piece seem a good place to start, but I won’t be aiming for any time records. It’s not quite vertical travel (I will, after all, be leaving my bedroom) but a chance to explore, learn and reflect, without going very far at all.